Shri Rajen Gohain, Honorable Minister of State for Railways inaugurated the elevator on Platform No. 3 & 4 along with the inauguration of UDAY Express from Coimbatore to Bangalore on June 8, 2018 . After several audits and meetings of Swarga Foundation’s members with the higher officials in the Salem Division, the elevator is finally functional. Now, people with disabilities, senior citizens and children can reach these platforms with great ease at Coimbatore Railway Station where more than 30,000 people use the station everyday. The smiles on Mr. Sadiq Ali’s family is proof of just that. His parents bring him to Coimbatore from Erode every week for his treatment. They are happy that this would be the last time, they would have to carry their son up the stairs. What a relief!

Swarga Foundation believes in bringing positive change, one step at a time. 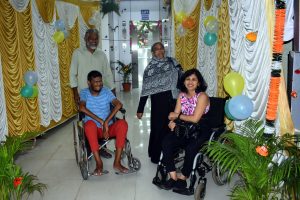 Members of Swarga Foundation attended the 1st DRUCC(Divisional Railway Users’ Consultative Committee) meeting chaired by the Divisional Railway Manager (DRM) at Salem on May 29, 2018. They submitted a petition on behalf of differently-abled and senior citizens covering the following points:
1. To ensure that the elevators on all the platforms of Coimbatore Railway Station start functioning.
2. To increase the door width of the coaches ordered for the Nilgiri Mountain Toy Train which operates from Mettupalayam to Ooty to promote accessible tourism.
3. To set up a “May I help you booth” to provide assistance to the physically-challenged and senior citizens. This booth will provide services like Wheelchair, detachable ramp to the coach from the platform and Battery Car Operation.
4. To make all stations under Salem Division disabled and senior citizen friendly by building ramps, elevators and wheelchair friendly toilets. 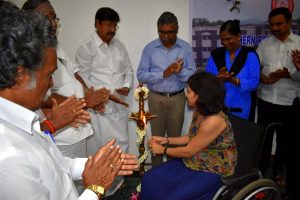 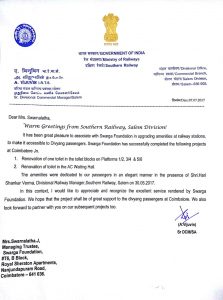 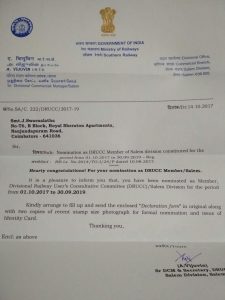 Additionally, the DRM, Mr.Verma granted Swarga Foundation permission to convert one of the two regular toilets in the AC Lounge on Platform 3-4 into a unisex wheelchair accessible toilet. This project was completed and handed over to the railway authorities in May 2017. Swarga Foundation was made a member of the Divisional Railway Users’ Consultative Committee (DRUCC), Salem Division from September 1, 2017 to work to improve the accessibility at all stations under their control. Mr. Verma, the Divisional Manager informed at a press conference on May 30, 2017 that he would sanction Rs.8.5 Lakhs for making other stations of the Salem division wheelchair accessible. 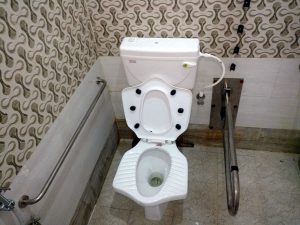 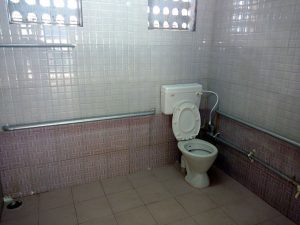