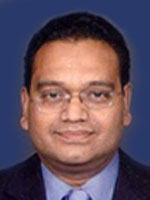 Dr. Arul Selvan completed his MBBS from Thanjavur Medical College in 1990 and completed his MD (General Medicine) from MGM Medical College, Indore in 1993. After completing DM (Neurology) from Institute of Neurology at Madras Medical College in 1996, he went to England to sharpen his knowledge in Neurology. After passing MRCP examination, he completed training in Oxford under internationally renowned professors at Radcliffe Infirmary. He was appointed as Consultant at Walton Center for Neurology in Liverpool which is a premier Neurosciences Institute in North of England. He was Consultant there for 6 years. He was also nominated for fellowship by Royal College of Physicians of London and Edinburgh (FRCP) for his outstanding achievements.

SPECIAL AREAS OF INTEREST
• Apart from General Neurology, Dr. Arul Selvan is interested in neuromuscular disorders, epilepsy, movement disorders and nerve conduction and EMG studies. He plans to establish epilepsy surgeries for intractable epilepsies, movement disorder surgeries with deep brain stimulation for Parkinson’s disease and dystonia and high quality Neurophysiology Lab. He is the 1st one to do deep brain stimulation for parkinson’s disease and successfully continuing the program. He also introduced Baclofen pump for severe spasticity. He introduced injection NATALIZUMAB for highly active multiple sclerosis 1st time in India. He established spinal cord stimulation and dorsal root entry zone ablation (DREZ) for intractable neuralgic pain.
• He was a leading member of team for epilepsy and movement disorder surgeries at Walton Center for Neurology. These innovative treatments are not yet well established in Tamil Nadu particularly in Coimbatore.